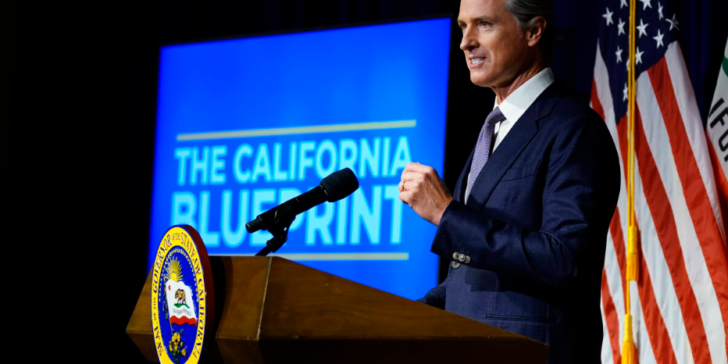 California is eyeing an operating budget surplus that has swelled to nearly $100 billion, increasing the state’s budget to over $300 billion for the coming fiscal year, Gov. Gavin Newsom announced Friday.

Newsom revealed his revised $300.7 billion budget plan for the coming fiscal year, including a $97.5 billion operating surplus. While a large chunk of the surplus will go toward education and debt payments as required by law, Newsom announced that about $49.2 billion is discretionary.

“Simply without precedent,” Newsom said of the surplus during the budget presentation in Sacramento Friday. “No other state in American history has ever experienced a surplus as large.”

A key piece of Newsom’s plan to spend the surplus is an $18.1 billion relief plan to address inflation.

The plan, announced Thursday ahead of Newsom’s budget presentation, includes $11.5 billion to provide tax rebates to Californians by offering up to $800 rebates to many registered vehicle owners. The proposal excludes vehicles “over a certain value,” but it is not specified in the budget proposal.

Californians, however, still could be months away from receiving rebates to address inflation and gas prices, the Los Angeles Times reported this week. With relief potentially months away, Republican lawmakers responded Friday with a call to suspend the state’s 51-cent gas tax immediately – a proposal that Newsom rejected during Friday’s press conference.

“The governor is living in an election-year Fantasyland if he believes promises of debit cards and rebates in the Fall will provide relief now,” Senate Republican Leader Scott Wilk, R-Santa Clarita, said in a statement.

“The governor and Democratic leaders should take a page out of the Republican playbook and suspend the gas tax immediately,” he later added.

Newsom also promoted expansions for reproductive health access in California, highlighting spending to maintain abortion access for individuals inside and outside the state.

Earlier this week, the governor’s office announced a $125 million Reproductive Health Package that includes $40 million for grants to reproductive health care providers to offset the cost of abortions for low and moderate income individuals without insurance.

Another piece of Newsom’s spending plan proposes an additional $17 billion for infrastructure investments, including billions for energy, broadband, housing and homelessness. The governor had initially proposed $20 billion for these investments in his January budget, bringing the May revised total to $37 billion.

The governor also announced a commitment to expand funding for the state’s COVID-19 response, announcing an additional $1.1 billion to focus efforts on “fighting COVID-19 with science.” Those funds include money for vaccines and therapeutics and wastewater monitoring to track infection rates across the state. In total, the budget includes $2.3 billion to continue fighting COVID-19.

Newsom’s budget plan also includes $65 million to fund his proposal – dubbed “CARE Court” – to create a procedure in civil courts to implement court-ordered treatment plans for Californians with schizophrenia or other psychotic disorders.

On climate change, Newsom announced $8 billion to address energy in the state, including $5.2 billion to create a “strategic electricity reliability reserve.” Newsom said Friday that the reserve would put together 5,000 megawatts to be available “at a moment’s notice” to prevent blackouts.

When asked if the state’s surplus indicates taxes are too high, Newsom responded that the money is a “sign of how well a number of people are doing in this economy.”

“I am proud of California’s progressive tax system,” Newsom said.

Newsom and lawmakers must agree on a budget by mid-June. The state’s fiscal year will begin on July 1.

Leading lawmakers called Newsom’s budget proposal “encouraging” on Friday but noted there is still “more discussion and negotiation” to be done on certain proposals. Lawmakers promised to continue collaboration with both chambers of the Legislature and the governor’s office to reach a final agreement.

“The bottom line is, California will have another responsible, on-time budget that provides immediate and long-term benefits to all Californians, and maintains our state’s overall financial strength in case of potential downturns in the future,” Senate President Pro Tempore Toni Atkins and Sen. Nancy Skinner said in a joint statement.

This article was originally posted on California eyes $97.5B tax revenue surplus, Newsom pitches $300B budget