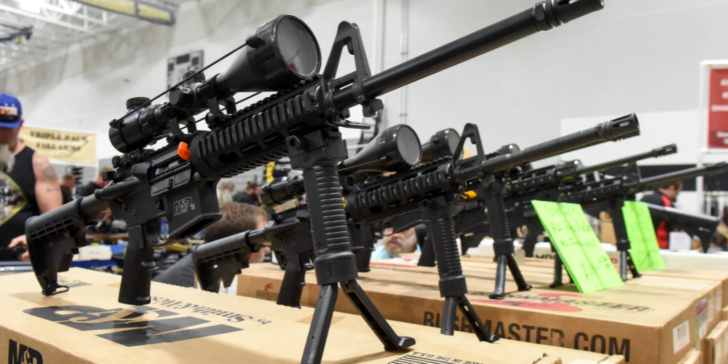 A bill modeled after Texas’ controversial abortion law that would allow any Californian to sue gunmakers and distributors who sell assault weapons, ghost guns and .50 BMG rifles cleared an important hurdle in the state Senate on Tuesday.

Senate Bill 1327, authored by Sen. Robert Hertzberg, D-Van Nuys, would allow private citizens to bring a civil lawsuit against anyone who manufactures, distributes, transports or imports “assault weapons” and unserialized weapons, also known as “ghost guns.” Citizens could collect up to $10,000 on top of legal fees. The bill advanced through the Senate Judiciary Committee on Tuesday.

The bill is sponsored by Gov. Gavin Newsom, who in December called on the Legislature to develop a law modeled after Texas’ abortion law that allows private citizens to sue anyone who “aids or abets” an abortion after roughly six weeks. Newsom said at the time that “If [Texas] can ban abortion and endanger lives, [California] can ban deadly weapons of war and save lives.”

Hertzberg called SB 1327 a new tool for the state to reduce the “extraordinary and horrible epidemic of gun violence.” He added that the bill would “harness the power of community,” comparing it to Amber Alerts or posting mugshots at the Post Office.

Tuesday’s hearing came on the heels of the worst mass shooting in Sacramento history that left six dead and 12 injured Sunday. The Sacramento Police Department arrested one suspect on Monday for assault and illegal firearm possession charges and placed a second suspect who was injured in the shooting in police custody on Tuesday for possession of a firearm by a prohibited person and possession of a machine gun.

A third person found near the shooting was arrested for being a prohibited person in possession of a firearm but wasn’t labeled a suspect and was released after posting bail on Tuesday, the Sacramento Bee reported.

The mass shooting renewed calls for stricter gun laws and had lawmakers vowing to act to prevent future gun violence tragedies. So far this year, there have been 122 mass shootings and over 11,000 deaths associated with gun violence, according to the Gun Violence Archive.  Of those, 6,270 were suicides.

“The alarm bells are blazing. We could not have a clearer call for action on gun violence than what happened here Sunday at the doorsteps of democracy,” Hertzberg said during a news conference after Tuesday’s committee hearing.

Several members of the Senate Judiciary Committee questioned whether SB 1327 would attach California to Texas’ controversial abortion law, leading some legislators to question this approach.

Chair of the Senate Judiciary Committee Sen. Tom Umberg, D-Orange County, said SB 1327 has two goals – to provide a “creative enforcement mechanism” to enforce existing laws and to “highlight the absurdity of the Texas law.” He noted that Hertzberg’s bill contains a provision that would essentially void the law if the court decides that Texas’ enforcement mechanism for abortion is unconstitutional.

“I’m hopeful that there will be a finding that the Texas enforcement mechanism is crazy,” Umberg said Tuesday, adding that he hopes that Hertzberg’s law would be eventually voided “because the Texas law is found is found to be wrong, unconstitutional and crazy.”

Hertzberg’s proposal is one of several gun laws proposed this year that are working their way through the state Legislature. Among those proposals include a bill that would restrict certain categories of weapons from being marketed to minors.

Last week, a Senate committee blocked a bill that would have required parents to disclose whether they kept firearms in the home. On Tuesday, Sen. Anthony Portantino, D-La Cañada Flintridge, the bill’s author, vowed to reintroduce the bill next year.

Hertzberg’s bill was re-referred to the Senate Committee on Public Safety, where it will be heard next.