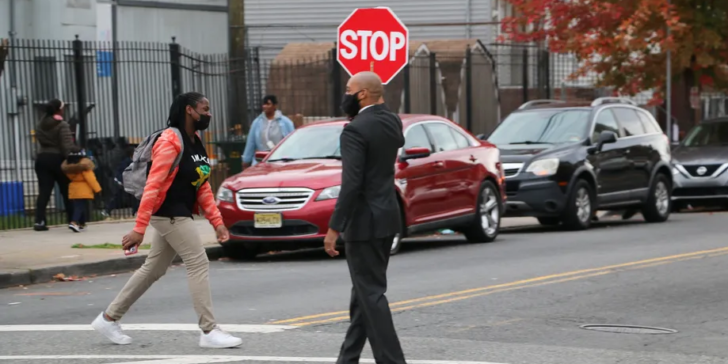 The principal of Hawthorne Avenue School in Newark stood in the middle of a busy intersection Friday morning, halting traffic with a cardboard “STOP” sign.

Principal H. Grady James, IV, who sported a dapper suit and bowtie, was there to hold back cars so his elementary school students, some wearing tiaras and cowboy hats to celebrate Halloween, could make it safely across the street.

Normally, that would be the job of a crossing guard. But James has been playing that role since the school’s guard got sick a couple weeks into the school year and wasn’t replaced.

Hawthorne Avenue is one of several schools without a crossing guard this year as Newark and other cities in New Jersey and different states struggle to fill openings. Schools have also had trouble staffing other positions during the pandemic, including teachers and bus drivers, which has disrupted some students’ learning.

But the crossing guard shortage is especially high stakes: With many children walking unaccompanied back and forth from their newly reopened schools, this shortage could put children’s lives at risk.

“It’s an emergency,” said Sharon Redding, a community activist who lives near Hawthorne Avenue School and recently waved her cane to stop traffic so students could cross the street. “We could have a child that’s injured or killed right here on this corner.”

Newark has 11 openings in a force of 126 crossing guards, according to the city police department, which employs them. More than 57,000 students attend at least 115 different public schools in Newark, including traditional and charter schools.

Even if all the crossing guard positions were filled, Newark would still have fewer guards than it budgeted for five years ago, when the city said it was hiring dozens of additional guards to bring the total to 161. Since then, several new public schools have opened, presumably creating a need for even more guards.

Redding raised the issue at a public safety meeting this week, where Capt. Rasheen Peppers, commanding officer of the Fifth Precinct in Newark’s South Ward, acknowledged the crossing guard shortage.

“What you’re saying, Ms. Sharon, is something I’m hearing from a lot of schools that are calling and asking for that assistance,” Peppers said, but added that he cannot send officers to help students travel safely to school because they have other urgent duties. “That would cause me to utilize resources where now I’m going to neglect people that are actually calling for service.”

Dawn Haynes, president of the Newark school board, said at the meeting that she put in a request for more crossing guards in her capacity as an aide to Mayor Ras Baraka. However, the school board cannot force the police department to make hires, she added, noting that she has personally witnessed Principal James take on the role of crossing guard.

“It’s kind of disheartening watching one of our amazing principals use his morning time to cross students,” she said during the Tuesday meeting.

In a statement, Newark Public Safety Director Brian O’Hara said his department will seek to fill the crossing guard vacancies at a career fair the agency is hosting in the coming weeks. He added that the existing guards are assigned to schools based on a variety of factors, including school enrollment, student ages, and traffic patterns.

Across the country, schools and companies are struggling to fill job openings for a variety of reasons, including workers’ lingering concerns about COVID-19 and their search for higher-paying jobs.

In Newark, a group of community outreach workers has volunteered to double as crossing guards. The workers, part of the Newark Community Street Team’s Safe Passage program, already patrol the streets around several South Ward schools in an effort to keep students safe during their daily commutes. Mayor Baraka, who established the group to help reduce community violence, said this week that he wants to expand the Safe Passage program to all five wards.

However, the group’s offer appears to have hit a snag because the police department evaluates the criminal history of crossing guard applicants and some of the outreach workers, who help mediate neighborhood conflicts, were previously incarcerated. Any applicant convicted of a crime in the first through fourth degree is automatically disqualified from becoming a crossing guard, a police department spokesperson said.

As a compromise, the group has asked the department to train its outreach workers to serve as crossing guards without actually hiring or certifying them, said Daamin X. Ali, the Newark Community Street Team’s field director.

The actual certification could not be given to us, he said at the public safety meeting. “However, the training could be done.”

In the meantime, some Newark students are left to traverse busy city streets without adult supervision.

Principal James has directed traffic most mornings outside Hawthorne Avenue School since the crossing guard left last month, according to parents and students. James referred questions to a district spokesperson, who said the district has asked the police department to fill the openings.

When school let out one afternoon this week, groups of students rushed to cross Hawthorne Avenue whenever the traffic light flashed red. Other children gripped their parents’ hands as they made their way across the intersection, which does not have pedestrian crossing signals. Occasionally, cars drove through the crosswalk with children still in the street.

It’s really dangerous, said Shaneice Lewis, whose three children attend Hawthorne Avenue School. She noted that, in August, a motorist died after crashing her car into a city bus in front of the school.

“I have to come up here and get them if I’m not working,” Lewis said as she picked up her children Wednesday. “If not, only prayers can help them.”

This article was originally posted on As Newark schools face crossing guard shortage, one principal directs traffic himself