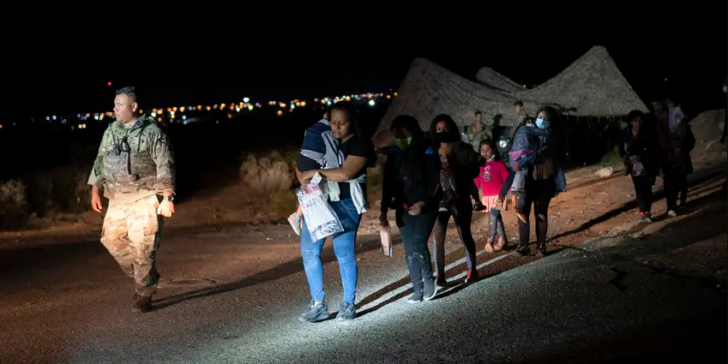 Allen West, a conservative firebrand running for governor, called for an investigation into Operation Lone Star and the resignation of the leader of the Texas Army National Guard following reports of problems with pay and working conditions during Gov. Greg Abbott’s highly touted mission to curb border crossings.

In a news conference in Richardson, the retired Army lieutenant colonel said guard members who have been activated for Operation Lone Star are experiencing habitual pay delays and poor working conditions during the border mission. West said the guardsmen are being exposed to COVID-19 and are missing ammunition and other equipment when they are deployed.

West said he learned of the issues from guardsmen who had reached out to him. Pay delays for members of the guard have been detailed in recent weeks by media outlets.

West also cited a December report by the Army Times that detailed four suicides by soldiers tied to the mission since November.

“This falls squarely on the shoulders of the person that ordered the commencement of Operation Lone Star and that’s you, Gov. Abbott,” West said. A spokesperson for the Texas Military Department told the Army Times that the deaths were part of an open investigation, pending final cause of death.

On Tuesday afternoon, the Army Times reported two more incidents where soldiers tied to the mission harmed themselves. In the first incident, which happened the week between Christmas and New Year’s Day, a soldier in McAllen attempted suicide but survived and is recovering.

In the second incident, an off-duty soldier from the same unit accidentally shot himself in the head with his personal weapon early Saturday at a friend’s home. That soldier’s death is being investigated as an alcohol-related incident, according to the Army Times.

West called for the resignation of Maj. Gen. Tracy R. Norris, the adjutant general of the Texas National Guard, who was appointed by Abbott. If Norris does not resign, West said, Abbott should relieve her of command.

In a statement, Abbott spokesperson Renae Eze did not address the call for Norris’ resignation and referred questions about West’s claims to the Texas Military Department. Instead, she blamed the Biden administration for a “61-year record-high number” of border apprehensions in the state and touted statistics tied to the mission.

“Since Governor Abbott launched Operation Lone Star in March, National Guard soldiers and DPS troopers have apprehended over 85,000 migrants, arrested over 9,600 who committed a border-related crime, including smugglers and human traffickers, seized over 208 million lethal doses of fentanyl, and erected strategic barriers to stem the flow of illegal immigration,” Eze said in the statement. “Texas is beyond grateful for the brave men and women of the National Guard and DPS who are diligently and selflessly securing the border in the federal government’s absence. We continue working with service leaders to ensure all who are deployed in Texas and overseas have the support they need to keep forging ahead and serve our great state and our nation.”

Earlier in the day, Abbott issued his own news release related to “protecting the Texas National Guard from President Biden’s COVID-19 vaccine mandate.” In the release, Abbott announced his intent to sue the Biden administration over its directive to vaccinate all members of the military.

“There is no doubt, missions of this magnitude have administrative challenges, and onboarding thousands of Guardsmen into a state payroll system is always a hurdle for any National Guard state active duty mission,” he said. “However, we are always looking at continuous process improvements.”

Jones also said the department had been made aware of unsanitary conditions at some locations that did not have portable restrooms for soldiers but that the “scope of this challenge is not large.”

“As with any military operation, the first wave of personnel in have to operate in austere conditions with limited resources. Over time, the infrastructure follows,” Jones said. “We are working to address this issue. As missions evolve, we continually add additional infrastructure to better resource operations.”

West retired from the military after he was investigated in 2003 for using improper methods to force information out of an Iraqi detainee.

Abbott’s border mission has received criticism from Democrats and activists who say militarizing the border will not make it more secure and ignores the humanitarian pleas of migrants who seek refuge in the United States. But West’s criticism, which is focused on the lack of care for soldiers on the mission, is the most vocal condemnation of the mission from a member of Abbott’s own party — and one who is running against him in a GOP primary.

“Gov. Abbott is the commander-in-chief of the Texas National Guard. If he chooses to deploy those under his command, it is his duty to pay them, deliver the benefits he promised them, and ensure they receive proper mental health support in order to prevent the kind of tragedy we’ve seen in recent months,” O’Rourke said in a statement. “And if he can’t justify their deployment, he owes it to them and their families to send them home.”

West said Operation Lone Star lacked a clear directive. In a shot at Abbott — who recently held a press event to unveil the first 900 feet of the border wall and frequently tweets Operation Lone Star updates — West said the intent of the mission seemed to be “someone coming out and giving a political press conference, or maybe even putting out a tweet.”

“We rushed into a failure. We decided that it was all about a political optic,” said West, a former Republican Party of Texas chair who previously served as a Florida congressman. “It was about a political opportunity. It was not really about understanding what the mission and the task of purpose should have been.”

That rush to deploy soldiers to the border, West said, has resulted in an “undue burden” on soldiers and their families who were unprepared for the mission.

West was joined at the press conference by retired Command Sgt. Maj. Jason Featherston, who was the Texas Army National Guard’s senior enlisted leader from May 2020 until his retirement in November and who has spoken out about the working conditions for guard members deployed to Operation Lone Star.

Operation Lone Star began in March when Abbott said he was trying to stem an increase in migrants at Texas’ southern border, which he said was spurred by the Biden administration’s soft enforcement of immigration law. As of November, Abbott’s office had deployed 10,000 guard members to the mission.

This article was originally posted on Allen West blasts Gov. Greg Abbott over suicides, pay problems among National Guardsmen at the border