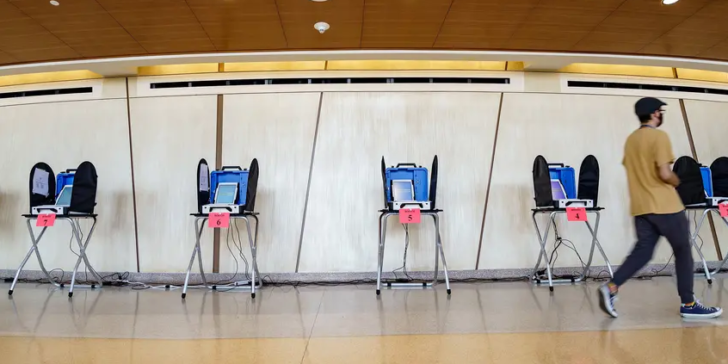 More than a month after Texas restricted how and when voters cast ballots, the U.S. Senate plans this week to take up a bill that could override parts of the state’s new elections law — and impact new political maps state lawmakers approved in the past week.

The Freedom to Vote Act would create a national standard for voter access, establish automatic voter registration and lift various state-level restrictions that limit access to the ballot box.

The Senate is expected to hold a procedural vote on the Freedom to Vote Act on Wednesday. This comes after Gov. Greg Abbott signed into law the Texas bill that tightens mail-in ballot rules, boosts protections for partisan poll watchers and rolls back local voting initiatives like drive-thru voting.

But the federal bill that takes aim at state legislation like the one Abbott signed faces an uphill climb in the Senate, where Republican U.S. Sen. Ted Cruz of Texas recently blocked another piece of federal voting rights legislation.

As former President Donald Trump continues pushing for election audits after making baseless claims of voter fraud in his reelection loss last year, Republican lawmakers argue that states should set their own voting rules and that new restrictions are necessary to preserve election integrity, although there is no evidence of widespread voter fraud. Yet Democratic lawmakers and voting rights advocates argue that the voting restrictions are actually a partisan effort to disenfranchise voters of color and suppress Democratic votes in urban areas.

Here’s what you need to know.

What does Texas’ new voting law do?

It is now a state felony for Texas election officials to send applications for mail-in ballots unprompted or use public funds to distribute ballots through third-party groups. Mail-in ballots were already limited to eligible voters who are 65 or older, are living or traveling outside of the county during the election, are confined in jail but otherwise eligible, or have a disability or illness that prevents them from voting in person without assistance or incurring health risks.

How would the Freedom to Vote Act impact Texas voting laws?

The federal bill would allow any voter to cast a ballot by mail while also preventing the state from requiring strict identification to obtain or return mail ballots. Under the bill, election officials would also have the authority to treat voter registration applications as mail-in ballot applications and allow third parties to distribute applications for mail-in voting.

The Freedom to Vote Act would also require states to have a ballot drop box in each jurisdiction for every 45,000 registered voters in all future elections. The bill also requires drop boxes for every 15,000 people who voted by mail in the most recent election.

While the legislation allows states to decide on the location of ballot drop boxes, it specifies that drop boxes must be “available to all voters on a non-discriminatory basis” and “geographically distributed to provide a reasonable opportunity for voters to submit their voted ballot in a timely manner.”

In addition, the Freedom to Vote Act prohibits states from banning or invoking any restrictions that would exclude eligible voters from participating in curbside voting. It also includes a “buffer rule,” requiring poll watchers to remain at least 8 feet away from voters and poll workers processing ballots. And it prohibits observers from disputing any voter’s eligibility unless they have a “good faith” claim.

How would the Freedom to Vote Act impact redistricting in Texas?

If passed, the Freedom to Vote Act would establish strict criteria for redistricting, eliminate partisan gerrymandering and “establish clear, neutral redistricting standards.” The bill also grants more power to the court systems to quickly adjudicate gerrymandered or discriminatory maps and bans mid-decade redistricting — a practice Texas Republicans took advantage of in 2003 after winning control of the Legislature in the previous midterms.

Additionally, the bill would require legislatures to make proposed maps easily available to members of the public and allow for public comments online and in hearings.

The Texas Legislature in the past week has sent to the governor new political maps for the statehouse, the State Board of Education and the U.S. House that fortify the Republican majority in state government and Texas’ congressional delegation.

The new state Senate map would draw safe seats for Republican incumbents who were facing competitive races as their districts diversified over the last 10 years. state The House map would bolster Republicans’ edge in districts that had grown competitive over the last decade and create new battleground districts. And the new congressional districts would shore up the GOP’s dominance and yield little ground to the people of color who have driven the state’s growth.

The Freedom to Vote Act would limit the drawing of election maps that have a statistically high partisan bias.

According to Michael Li, senior counsel for the Brennan Center for Justice’s Democracy Program, Texas’ new maps would be considered illegal under this provision and could not be used until the state establishes that a better map is not available.

“So if the Freedom to Vote Act were in place, Texas would be barred from using the map once a court made that determination until the state rebutted the presumption,” Li said.

The redistricting changes would apply retroactively if the Freedom to Vote Act were to become law.

“The way that it’s written, the state can’t use this map for an election that doesn’t comply with the act. And so the first election isn’t until March, a primary, so there’s a window of time that this could still be blocked,” Li said.

In Washington, D.C., Democrats are pushing for multiple election bills

The Freedom to Vote Act is also a part of a larger push by congressional Democrats and civil rights advocates to codify voting rights expansions into federal law. The John R. Lewis Voting Rights Advancement Act would also negate state-level voting restrictions in Texas and expand protections for voters of color.

Named for the civil rights icon who died last year, the bill centers around restoring the federal preclearance process established in Section 5 of the Voting Rights Act of 1965.

Preclearance requires states with a history of racial discrimination to gain the approval of the Justice Department or a federal court before changing voting laws or procedures. That requirement was voided by the 2013 U.S. Supreme Court decision in Shelby County v. Holder.

Eliza Sweren-Becker, counsel for the nonpartisan Democracy Program at the Brennan Center for Justice, said both bills work in tandem to protect voters of color.

“Those states and localities with that history would be subject to the preclearance regime under the new formula set up under the John Lewis Voting Rights Act, and Texas is very likely to be covered by that preclearance regime because of its persistent and recent history of voting, of policies that that have been found to discriminate in voting,” Sweren-Becker said.

What’s the likelihood the federal bills will pass?

In the face of staunch GOP opposition, it’s unlikely either the Freedom to Vote Act or the John Lewis Voting Rights Advancement Act will receive the 60 necessary votes to overcome a filibuster in the Senate.

Senate Minority Leader Mitch McConnell indicated earlier this month that the Freedom to Vote Act has no Republican support, and without procedural change to the filibuster, the bill is likely to stall.

Still, Sweren-Becker notes that despite the challenges facing both bills in the upper chamber, it’s essential that Congress enact voting rights protection laws combating the growing number of state restrictions.

“I think we’re seeing a real crisis moment for democracy in the country … as states across the country try to undermine voting access and make it harder for Americans to participate in our democracy,” she said. “It’s essential that Congress use the power that it has to push back and enact legislation that is going to protect Americans’ right to vote and make sure that everybody has free and fair access to the ballot box.”

This article was originally posted on After Texas and other states passed new voting restrictions, federal bills could expand ballot access. Here’s what you need to know.