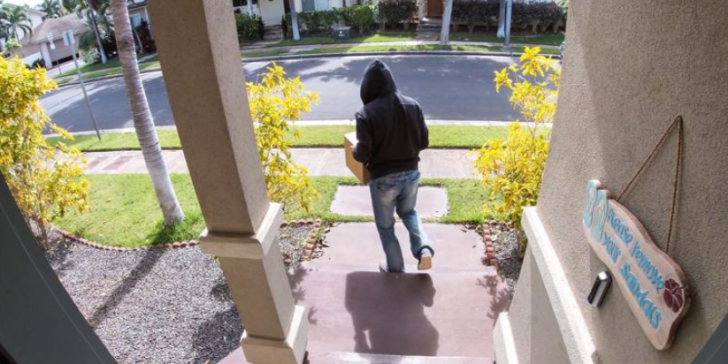 Pauline Li knows what it’s like to be targeted by porch pirates.

From groceries to feminine products to electronics, Li has lost track of the number of packages that have vanished from her porch because she was not home when the delivery arrived.

“It’s well-known common knowledge that if you live in San Francisco, you’re going to experience package theft during your stay in the city, no matter where in the city you live,” Li told The Center Square. “We have experienced countless porch thefts. I can’t even begin to count how many, but pretty much, if you’re not there to pick [the package] up right away, right after it got dropped off on your porch, it’s going to get taken.”

This regular pattern of porch theft became a magnified nuisance during the COVID-19 pandemic, Li said, as she and many other families in the city frequently were ordering groceries and other necessities for home delivery. When packages full of food disappeared, including allergen-free items for her child with food sensitivity, it was enough to make Li consider a life for her family elsewhere.

After two and a half years of living in the city and dealing with rampant porch theft, Li decided to move her husband and two children out of San Francisco to Walnut Creek, a suburb about 30 minutes outside of the city, earlier this year.

Now that she’s settled into her new home, package theft is no longer a regular problem for Li and her family, and she does not have to deal with the inconvenient loss of necessities delivered in the mail.

SafeWise’s recent survey of 1,000 American adults showed 64.1% of respondents said they were a victim of porch theft in the past year; a stat SafeWise estimated equates to about 210 million packages stolen. The survey also found 53.5% of people surveyed had multiple packages stolen over the past year.

Some analysts expect instances of porch theft to increase during the holiday season because of the massive amount of packages that will be delivered across the country ahead of Christmas.

“Package theft is a crime of opportunity,” Dr. Ben Stickle, a member of the SafeWise advisory group and an expert on package theft, said in the latest report. “The more packages left for longer periods of time on a porch, the more likely they are to be stolen. As the Christmas gift season gets into full swing, there will be a significant increase in packages on a porch.”

The SFPD does not track package and mail theft in separate statistics, so it’s impossible to say whether this increase was driven by a rise in porch piracy.

“There are a number of factors that may indicate increases and decreases in certain crimes,” SFPD Public Information Officer Adam Lobsinger told The Center Square in an email. “As a department, we are constantly evaluating all crime trends and different ways to combat those trends throughout the city. This includes the redeployment of resources and increased patrols, foot beats and officers on fixed post in crime hot spots. This not only allows us to rapidly respond to crimes in progress, but also act as a visual deterrent to would-be criminals.

“We encourage anyone who thinks they are the victim of a crime to contact us so we can fully investigate the incident.”

Li said she never reported package theft to San Francisco police, even when she had video of the suspect on her Ring doorbell system. She said some people share their Ring video footage on apps such as Citizen, which alerts neighbors of potential crime and police activity in the area, though she does not know anyone who has contacted the police regarding porch piracy.

“Most houses have those Ring doorbells or some sort of a camera on their doorbell, and it just is not a deterrent at all,” Li said. “[Porch pirates] will just wear a hat and most people are masked up anyway during the pandemic, so I would think that it will be harder to catch them because they’re bundled up in some sort of a way.”

Instances of widespread porch piracy statewide, including in Bay Area cities, was enough to draw the attention of some members of the California Legislature earlier this year.

Sen. Brian Jones, a Republican representing Santee, introduced Senate Bill 358 in February. It would have allowed judges to impose up to a year in jail for anyone who stole packages from a person’s home, business or along a mail route. Under existing law, judges can sentence offenders for six months.

The bill did not make it to the governor’s desk during the past legislative session, but Jones said he plans to continue efforts to address porch piracy in the Legislature.

“California has recently been riddled with crimes – from smash-and-grab robberies to porch piracy,” Jones said in a statement to The Center Square. “Sadly, the most vulnerable in our community, such as seniors and disabled people, rely on their packages for survival, and the so-called ‘Porch Pirates’ often target delivery trucks and commit multiple thefts in that neighborhood throughout the day.”

Jones said some police agencies are so desperate for tools to combat porch piracy, they have “resorted to planting decoy packages in an attempt to curb the epidemic.” He said the issue remains a priority for him heading into the next legislative session, which begins Jan. 3.

“With porch piracy and crime overall on the rise in California, the fight is not over, so I will try again this year to convince my colleagues across the aisle that their coddling of criminals is dangerous to our families and hurting our communities,” Jones said.

Some businesses, including Amazon, have made efforts to deter porch piracy by setting up a program where packages can be delivered inside a garage. Amazon’s program, called Amazon Key for Garage, allows customers to monitor their garages via camera and receive notifications once a package is dropped off inside.

While this may be a good option to prevent theft in some areas, Li said a garage is a luxury few people have in the city, or if they do, it often is shared with other apartment units.

For now, as theft continues to run rampant in San Francisco, Li said it is an ongoing “pain point” for many people, especially for families with children. The frequency of theft was enough for her to decide leaving the city was the best option for her children.

“Just the fact that people will blatantly just do something like this or just take somebody else’s package in broad daylight anytime of the day, it certainly doesn’t make me feel any safer,” Li said.

“As much as we love the city, we just felt that it just wasn’t the kind of environment that we want our children to grow up in. And that’s why we left.”

This article was originally posted on Porch piracy runs rampant in San Francisco, driving some residents from city